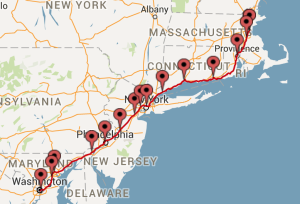 Donald Trump won five primaries yesterday. Hillary Clinton won four. We could have predicted these outcomes last week from pre-primary polling and the demography of the states in play. Yet as the presidential campaign traveled the Acela line, with Tuesday primaries in Rhode Island, Connecticut, Pennsylvania, Delaware and Maryland, some of the same pundits who declared Wisconsin to be the beginning of the end for Trump because of his poor showing there were talking about his inevitability as the Republican nominee. And Bernie Sanders’ path to the nomination was declared even harder to attain, even though we’ve known for some time that he has no path to the nomination absent a Clinton collapse. Journalists of course have to write stories, but can we put to rest the idea that this primary campaign is driven by momentum? I mean, how many times does Trump have to not collapse before reporters give up on the notion that this time really spells the end? Maybe Trump will be the first ballot nominee and maybe he won’t. We’ll know in June. For now, can we stop pretending that the outcome depends on anything more than the breadth of Trump’s appeal?

Primary and caucus results stopped winnowing the field of Republican contenders once it was reduced to Trump, Cruz and Kasich. Since then, election results have had no bearing on who is in or out. If they did there would be nothing left to talk about except Trump’s choice of a running mate, but since a significant portion of the Republican establishment will not accept this outcome, the Cruz and Kasich campaigns continue to be treated as viable #NeverTrump possibilities. Neither candidate can win the nomination outright on the first ballot, but if Trump is also denied then we enter the land where supposedly anything is possible. If not for the potential of this scenario, Cruz and Kasich would be escorted off the stage like so many other failed candidates. Instead, they continue to be treated as factors in a race where a lot of hefty players are trying to derail the lead horse.

Let’s try a thought experiment. What would the reaction have been in 2012 if late in the primary season Rick Santorum and Newt Gingrich had agreed to concentrate their resources in states they each had the best chance to win, effectively agreeing not to campaign against each other in a concerted effort to stop Mitt Romney? Sounds pretty silly, doesn’t it? After all, Gingrich won a grand total of two states and Santorum a total of eleven. Even if they could have convinced their supporters to follow their lead, what difference would it have made for two also-ran candidates to join together against a prohibitive frontrunner? But that’s exactly what the campaigns of Ted Cruz and John Kasich attempted to pull off this week, with Kasich reportedly conceding Indiana to Cruz and Cruz conceding New Mexico and Oregon to Kasich. The New York Times said the arrangement “seemed like a breakthrough” for the Stop Trump forces. Instead, it rapidly collapsed under the weight of its own ridiculousness.

A better way to stop the frontrunner is by winning somewhere. The Northeast is a region where Kasich should have had natural strength, but nowhere did he finish better than a distant second to Trump, who padded his delegate lead by sweeping the region. Had Cruz agreed to abandon all five contests it wouldn’t have made a difference to the outcome. Cruz is struggling because he is running out of states where the demography and political culture give him the advantage. Kasich is struggling because he has been rejected in every state that hasn’t elected him governor. At least Gingrich won South Carolina in addition to his home state of Georgia.

If Trump can’t get enough people to vote for him he may still fall short of winning sufficient delegates for a first ballot victory in Cleveland, in which case he will face an uphill battle to secure the nomination. His five commanding Acela wins do not change this possibility, nor do they move us any closer to knowing what his final delegate total will be. We still have to wait for California to find that out. Despite the overwhelming scope of Trump’s victories and the breathless way they were reported, yesterday’s results don’t tell us anything we didn’t already know.