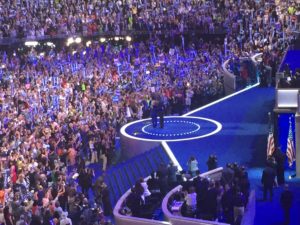 Forty-eight hours after Democrats threatened to tear themselves apart over lingering and meaningful rifts between Bernie Sanders and Hillary Clinton, the Democratic convention blossomed Wednesday into an exultant celebration of American democracy. While vocal pockets of dissent remain, the contrast between the two days was stunning. Wednesday’s session was boisterous, upbeat and fun, not to mention flawlessly managed and slickly produced.

It was also the day when a series of powerhouse speakers made the case for Hillary Clinton’s candidacy in terms that transcend the usual ideological and partisan differences of an election campaign. In sequence, Joe Biden, Michael Bloomberg, Tim Kaine and Barack Obama projected optimism about the future without being unrealistic about the challenges so many people face. But they did more than that. They framed the election in terms of the stakes for democracy, casting the choice between Hillary Clinton and Donald Trump as a choice between freedom and authoritarianism.

Politically, they hit the right buttons, testifying to Hillary Clinton’s passion, work ethic and accomplishments. Joe Biden, folksy and forceful, spoke to blue collar white voters who have been flocking to Donald Trump. Michael Bloomberg, the former Democrat turned Republican turned independent, was brought on to challenge Trump’s business credentials and persuade independent voters who dislike both major candidates to take a second look at Hillary. Vice presidential nominee Tim Kaine honored the accomplishments of his Republican father-in-law, like Kaine a former governor of Virginia, in a play to give the ticket bipartisan appeal at a time when a significant number of Republicans are turned off by their nominee. All spoke of Hillary in personal terms, beginning the work of softening and reconstructing her image.

But the centerpiece of the night was the outgoing president. At one level, Obama’s speech was a victory lap that dissolved into a passing of the baton. But in a deeper sense it was a devastating and profound indictment of Trump’s candidacy as a threat to democratic principles and processes. Here is the core of that message, eloquently delivered by the president:

America is already great. America is already strong. And I promise you our strength, our greatness does not depend on Donald Trump. In fact it doesn’t depend on any one person. And that in the end may be the biggest difference in this election: the meaning of our democracy. Ronald Reagan called America a shining city on a hill. Donald Trump calls it a divided crime scene that only he can fix. It doesn’t matter to him that illegal immigration and the crime rate are as low as they’ve been in decades because he’s not actually offering any real solutions to those issues. He’s just offering slogans. And he’s offering fear. He’s betting that if he scares enough people he might score just enough votes to win this election. And that’s another bet that Donald Trump will lose. And the reason he’ll lose it is because he’s selling the American people short. We’re not a fragile people. We’re not a frightful people. Our power doesn’t come from some self-declared savior promising that he alone can restore order as long as we do things his way. We don’t look to be ruled. Our power comes from those immortal declarations first put to paper right here in Philadelphia all those years ago: We hold these truths to be self-evident that all men are created equal. That we the people can form a more perfect union. That’s who we are. That’s our birthright. The capacity to shape our own destiny.

This is a statement about values, uplifting and patriotic and optimistic about the future, conservative in its defense of democracy even as it celebrates a progressive vision of the nation. It is the kind of speech Republicans used to give when they could appeal to a collective sense of American identity, before they were taken hostage by voters who reject how that identity is changing.

In the hallways behind the media suites the chatter about the upcoming election ranged from tense to optimistic. Professionals I spoke with are expecting a close contest but feel Hillary will prevail. Clinton without question has work to do on image and message, and starting tonight we will see how she presents the rationale for her candidacy. But after three days in Philadelphia this cautious optimism is understandable. Delegates flooding the Wells Fargo lobby just before midnight were exuberant and spirited. Some were dancing. There was a buoyant energy, an eagerness to enjoin the political battles ahead and not re-litigate Monday’s rancor. Against all expectations, the Democratic Party is coming together, willing to bet along with the president that come November hope once again will trump fear.