Labor Day is behind us and we are about to be bombarded by post-holiday national and statewide polls marking the traditional start of the general election campaign. Of course, the notion that the campaign begins in the fall is a fiction left over from a time when presidential candidates declared their intentions in the same calendar year as the election. In reality, the presidential campaign is starting to wind down. Even though we have seen a number of polls suggesting the presidential contest is tightening there have been no changes to the fundamental structure of the race. To help you navigate the upcoming polling overload, here are four brief things to remember:

1. Hillary Clinton is still favored. Why? Because of this: 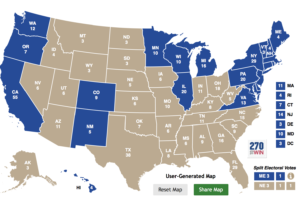 Remember this map from a few weeks ago? It portrays states where Hillary has a built-in demographic or political advantage, enough states for her to win the election. And this is without states where Clinton has an edge or is competitive, like Florida, Ohio, North Carolina, Nevada, Iowa, Georgia and Arizona. At this point, it will take a significant external event to alter the dynamics of a race where Clinton has numerous paths to 270 and Trump does not.

2. Ignore media coverage of polls. News outlets have an incentive to hype polls showing a close race. This is why recent coverage emphasizing how the polls have been tightening (which is true) tends to suggest that the race is getting more competitive (which is false). Why is it false? See item #1. Unless and until we see meaningful changes to the level of support Donald Trump is receiving from voters of color and educated whites, states like Colorado, Virginia and Pennsylvania will be out of reach for him. The stability of the race is confirmed by over-time polling averages showing Clinton with a sustained lead of at least several points. Support for both candidates has varied within a narrow band with Clinton’s range (between 44-48 percent of the vote) consistently higher than Trump’s range (between 38-42 percent of the vote). A period of bad media coverage may push Clinton’s numbers down to the low end of her range as weaker supporters peel away. Donald Trump may bounce up to the high end of his range by not spending every waking hour offending people. If these things happen together the race will appear to close by a few points. But nothing structurally will have changed unless something happens to change people’s minds.

3. If you can’t ignore media coverage of polls, ignore individual polls. The press tends to report polling figures as if they are accurate representations of the population, when in fact even the best polls are estimates of the population and contain multiple sources of error. So if a poll says that Hillary Clinton has a two-point lead in Ohio, this means she has a two-point advantage within a margin of error among respondents in a particular sample who may or may not be a good representation of voters who will go to the polls on Election Day. In the actual population of Ohio voters she may be leading marginally, or comfortably, or not at all. Sites with a good track record of forcasting elections like FiveThirtyEight and Princeton Election Consortium will aggregate polls and examine averages or medians. If you must ride the polls, at least these sites make sure you are securely fastened.

4. If you can’t ignore individual polls, remember some polls are better than others. Some polls sample a small number of respondents and have a high margin of error. Some polls stay in the field for many days or even weeks before they get their requisite quota of respondents and produce results that look like a time-lapse photo. Some polls are automated and are easy for respondents to disregard. Some are conducted for partisan purposes and sequence their questions to favor a particular result. Some contact only land lines. Do you know many young voters with land lines? Press coverage tends to ignore these details, but they are significant if they systematically undersample population groups. The most reliable polls have large sample sizes, are conducted by trained live interviewers, are designed not to lead respondents to a particular result, sample cell phones, and are conducted in English and Spanish. You can usually find out if a poll meets these criteria—and many do not—by reading the fine print.