In discussing the breakdown of political consensus in my last post, I referenced a piece from the Washington Post that documented how public opinion divides between Republicans and everyone else. It’s worth taking a closer look at the structure of this divide. Here is an updated version of the data used in the Post article, courtesy of Gallup, showing Donald Trump’s job approval among Republicans, Independents and Democrats through July 2: 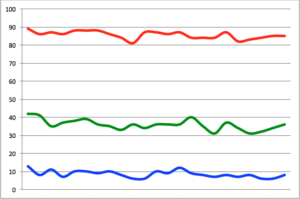 As you might expect during a polarized era, Republicans (in red) strongly approve of Trump’s performance and Democrats (in blue) strongly disapprove. But look at that green line in the middle of the chart. Those are independents, and while they are not as hostile to the president as Democrats, their opinions are deeply negative. Not once has Gallup registered anything close to majority support for the president among independents, who have bounced between 30 and 40 percent approval. Between Democrats and independents, a substantial majority of the electorate gives this administration a big thumbs down. But the voters at the top of the chart are living in a different world. These voters love Donald Trump and support him overwhelmingly. They are living on what I call Republican Island, isolated from the rest of the country. It’s them against the world.

Because the gulf between Republicans and everyone else is so stark, there is no room for movement between the two groups. History suggests Republican support will sag over time, but it is hard to imagine a scenario where it catches up to the rest of the country as long as Trump governs like he is the president of Republican Island. Unlike his predecessors, Trump didn’t move to the center during the campaign and he hasn’t moved to the center as president because the center of a bimodal electorate exists only in theory. As the above chart suggests, there are two poles in today’s politics and they hold irreconcilable preferences. History might advise a minority president who lost the popular vote to speak in broadly unifying language and do very little, then ask for a mandate four years later. But Trump attributes his election to the enthusiasm of his strongest supporters and has chosen to train his rhetoric on them while governing for the wealthy interests who bankroll Republican Island. He has offered nothing to the rest of the country and they have returned the favor in their judgment of his performance.

This is how you end up with a president whose overall job approval is stuck in the high 30s yet can still command the support of his partisans in congress. Typically when presidential support falls this low—and there’s no precedent for anything close to this in the opening months of an administration—members of the unpopular president’s party have scheduling conflicts whenever he’s in their neighborhood. But that’s not happening, even though the words and behavior of this president are especially difficult to justify or explain. They live on Republican Island as well, and they need Trump’s voters to remain enthusiastic and engaged through next year’s midterm election and beyond.

So much mainstream analysis of Trump’s political situation treats his base with great reverence, accepting the idea that he cannot risk alienating his core supporters as if it is normal for a president to govern for one-third of the country. It is not. In the world we once inhabited where public opinion moved smoothly from left to right, it would be impossible for a president or a party to drift too far to one side of the spectrum without being pulled back to the political center of gravity. That won’t happen as long as there is a gulf between Republicans and everyone else.

There are Republicans who recognize the risks of representing a cloistered minority of voters at odds with the larger electorate. Those risks will come into sharp focus as next year’s midterm elections approach, especially if enough voters on the mainland remain animated in their resistance to the Trump agenda. Republicans will find it increasingly difficult to represent a minority at odds with the larger electorate, but they have put themselves in a bind with no obvious way out. It’s no wonder why suppression efforts aimed at shrinking the pool of eligible voters have become such an attractive alternative.