Two items this weekend from the New York Times speak to the possibility that we are well along the road to a political realignment, a theme I have been writing about for a long time.

First, a column by Frank Bruni describes Steve Bannon’s plan to destroy the Republican establishment if he is unable to reshape the party in his white nationalist image by backing radical challengers to entrenched Republican congressional incumbents. Writes Bruni, “If Bannon can bend the G.O.P. in its current form to that vision, great. If he can’t, then he might as well destroy it to make room for something else.”

Second, a story titled, “The ‘Resistance,’ Raising Big Money, Upends Liberal Politics,” describes the challenge to Democratic Party orthodoxy posed by a nexus of dozens of grassroots protest movements that sprung up in opposition to Donald Trump’s election. Upstart groups advocating an aggressively progressive agenda are drawing liberal high rollers away from legacy organizations affiliated with the neoliberal politics of the Clinton era, igniting a “tug of war” between the two camps that “foreshadows a once-in-a-generation reorganization of the American left that could dictate the tactics and ideology of the Democratic Party for years to come.”

These two dynamics feed on each other and, as I wrote in Next Generation Netroots, reflect asymmetric but interlocking battles within the two camps. The left is undergoing a power struggle between a burgeoning progressive movement invested in changing political discourse to accommodate an unabashedly progressive agenda and an institutional left content with defeating conservatism. The Democratic Party is ground zero for their power struggle, where the insurgents have been flexing their muscles. The right, on the other hand, is embroiled in an ideological deathmatch between insurgent reactionaries bent on turning back the twenty-first century and staid conservatives animated by tax cuts and deregulation who until the Trump era were content to court the votes of nativists if they made Republican majorities possible. Now the nativists want to run the party and they are staging their purge.

These concurrent struggles are drawing energy from a signifiant shift in public opinion set in motion by the breakup of the right. This works to the benefit of those who hope to move the country leftward. Here’s why: 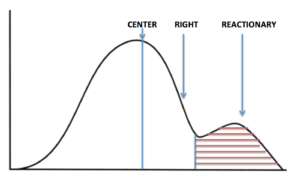 This is an approximation of how American public opinion is distributed today. In times we fondly remember as normal, you could locate most Americans close to the center of a figure like this. Democrats, for the most part, occupied the space to the left of center, Republicans occupied space to the right, and the two parties competed for voters in the middle. The emergence of the reactionary right changed all this. That second mode on the right incorporates the inhabitants of what I’ve been calling Republican Island. They are Donald Trump’s base and Steve Bannon’s foot soldiers and, as we discussed in a previous post, they are a relatively new phenomenon with a long history. The emergence of Republican Island scrambled our politics. Residents of the island hold an entirely different set of preferences than everyone else. They cheer on Trump’s disruptiveness and seek compromise with no one, including traditional conservatives who are used to having the space to the right of center all to themselves.

Because it is impossible to form a working coalition with reactionaries, the political right has shattered in two. That dip you see between the right and reactionary sections of the figure is an unbridgeable gap, and it leaves the right depleted of the voters it would ordinarily rely on to form a viable party. This poses a challenge to anyone looking to form a functioning center-right political coalition (it’s why George Will and David Brooks are currently without a political home) while leaving the balance of public opinion unclaimed. And that’s where the progressive left has an opportunity. In normal times, our unwieldy political parties plant themselves in the center of public opinion. But look at how the center line in the figure has been drained of voters to the right who aren’t living on the island. As the right peels away, the center of what’s remaining moves to the left. And that gives progressives the opening they need to move the Democratic Party with them.

Like failing marriages, party coalitions fall apart when their constituent groups have irreconcilable differences. And because party coalitions are part of a system, changes brought about by one side have repercussions for everyone. It’s hard to know where things will stabilize or how long this disruptive moment will last, but that is always the case during thunderous transitions between political systems. This is what political realignment looks like.