With the 2020 election six months away, we can take our first realistic look at the Electoral College map and assess where the battlegrounds are likely to be in November. Six months is an interesting benchmark because the election is still far enough in the future to be influenced by unforeseen events but close enough for us to have a pretty good feel for the strength and placement of the electoral currents likely to shape the contest.

What stands out to me about the 2020 map is its consistency. Last May, I wrote that I thought the election would be decided in ten states — five in the Rust Belt and five in the Sun Belt. Since then, we have had a presidential impeachment, a generation-defining pandemic and an economic collapse, but one year later those same ten states are indeed emerging as the strategic battlegrounds for the Trump and Biden campaigns. This speaks to the stubbornness of the macro factors driving the electorate: polarization and the gradual but relentless demographic erosion of the old political order.

The grey states on the map below are the ten battlegrounds that I identified last year: Pennsylvania, Ohio, Michigan, Wisconsin and Iowa in the Rust Belt, and Arizona, Texas, North Carolina, Georgia and Florida and in the Sun Belt. That they are all states Trump won in 2016 speaks to the tilt of the playing field in 2020 and reflects the fact that Donald Trump was elected by a minority of voters and chose to govern for his base, never rising above majority support during his three-plus years in office. Even before the pandemic, it was going to be a challenge for Trump to improve on his performance in states like New Hampshire and Minnesota, which he lost by slim margins to Hillary Clinton. 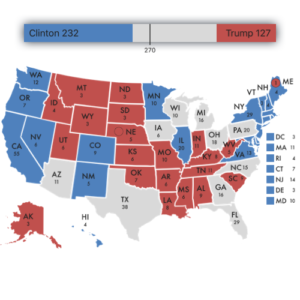 I would group these ten states into three categories based on their proximity to the likely electoral tipping-point:

Decisive States: Pennsylvania, Michigan, Wisconsin, Arizona. Trump won the Electoral College by peeling Pennsylvania, Michigan and Wisconsin from fabled the “blue wall” defense. Democrats had won each of these states every year since 1992, and they were key to the Clinton campaign’s confidence in their ability to withstand any Republican assault (as my longtime readers know, I thought their assumption was correct based on voting histories and public polling showing Clinton consistently ahead in all three). Combined, these states account for 46 electoral votes, and Hillary needed to add all of them to her total of 232 in order to inch past the requisite 270. Trump won these states by a hair — 0.72% in Pennsylvania, 0.23% in Michigan, and 0.77% in Wisconsin. Four years later, they continue to track very closely with national averages, once again making them the electoral fulcrum.

However, this cycle we can add Arizona to the tipping-point list. Like Colorado and Nevada before it, demographic change is starting to reposition this once solidly red state. Two years ago, Arizona sent a bisexual female Democrat to the United States Senate (the first time they elected a Democratic senator since 1994), and polling thus far shows the likely 2020 Democratic senate nominee comfortably ahead. Biden is running well in the early going, too. Arizona complicates the math for the Trump campaign, because it gives Biden a path to the White House without Wisconsin if he can recapture Pennsylvania and Michigan, where his lead is consistently stronger than in any of the other contested states. It explains why Trump’s first trip outside Washington since the start of the pandemic will be to Phoenix.

Contested States: North Carolina, Georgia, Florida. Hyper-partisanship and polarization have produced a rough rank ordering of the states according to their political lean. So, for instance, because Michigan trends more blue than Florida, if Biden loses the former he almost certainly will lose the latter. This means North Carolina, Georgia and Florida are unlikely to tip the election —  if Biden wins any of them he almost certainly will win enough states in the decisive category to carry the Electoral College. But it also means these three states are prerequisite to a Trump victory. His path was and continues to be narrow, and the fact that all three of these states are in play should be a big a source of concern to his campaign. Florida is always a toss-up, but North Carolina and Georgia are following Virginia as once-red strongholds undergoing  seismic demographic changes. Like Colorado, Virginia has completed its transition from solidly red to solidly blue and will not be contested this year — if Biden can’t carry Virginia he has already lost the election. North Carolina and Georgia are in transition, held back in large part by Republican policies that disenfranchise Democratic voters. But, with each cycle, changing population dynamics make that harder to do.

Reach States: Ohio, Iowa, Texas. If Biden wins any states in this group he is on his way to a landslide victory. Polling has been scarce in Iowa since the Democratic primary contest, and what little there is puts Trump ahead. Obama won the state twice, as did Clinton, but it has been trending away from Democrats as their base has become more urban, suburban, multicultural and educated. The detrimental effects of Trump’s trade policies on agriculture make it worth watching, and Iowa could become very competitive if Trump’s overall position slips as the pandemic and economic downturn persist. Ohio is another Clinton/Obama state that has been trending red, but polling this spring has shown it to be surprisingly competitive. Trump remains the favorite, but if Ohio is being contested in the fall his real problems will be to the east (Pennsylvania) and the north (Michigan).

For Democrats, Texas is the biggest reach state of the three. Vastly expensive, vastly hard to mobilize, and — well, just vast — Texas represents a huge investment with an enormous upside. Republicans cannot win the presidency without Texas. Several competitive Republican-held House seats and polling that shows Biden running almost even with Trump make Texas as enticing as it is risky, however political professionals on both sides will tell you that Texas is almost certain to remain red this year. Under present circumstances that looks to be the case. But it would only take a shift of a few points away from Trump in national polling to put Texas in play. Demography is pushing Texas to follow Arizona to purple status by 2024. It will be a light blue state by the end of the decade, and that will put an end to the Republican Party as we know it. But we’re not there yet.

Given this alignment of states, the election will turn on whether Trump can keep things close enough to prevent Biden from picking off any one of North Carolina, Georgia, Florida, Texas, Ohio and Iowa, while holding Pennsylvania or otherwise preventing Biden from cobbling together 38 electoral votes from Pennsylvania, Michigan, Wisconsin and Arizona. There are also scenarios that end in a tie and scenarios where the presidency is decided by single electoral votes awarded to a rural congressional district in Maine and an urban congressional district in Nebraska, but there’s no need to get into those at this point. If by late October national polls show Trump trailing by around three points or less — about where he was in 2016 — he will be within range to have a shot at winning. If it is closer to where it is today, with Biden ahead in polling averages by more than six points, Biden will win comfortably. If the travails of 2020 continue and shave a few more points off Trump’s national margin, close outcomes in the reach states will determine the size of Biden’s victory.

Joe Biden has multiple paths to the White House. Donald Trump has no margin for error. If the election were held today, Trump would lose. He still has time to turn things around, but with the election shaping up as a referendum on the incumbent’s handling of the pandemic and the economic dislocation it produced, Trump’s prospects deteriorate every day he fails to get ahead of the crisis.