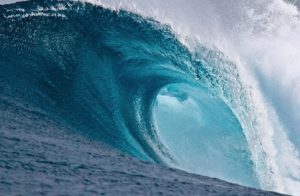 With less than a week to go before Election Day, the Democratic presidential ticket is campaigning in Georgia and Texas, while the Republican president and vice president are in Nebraska and South Carolina. That’s all you need to know about what the two campaigns think about the state of the electoral map. Biden is on offense in ten states where strong turnout could provide him with a broad and decisive victory. Trump is scrambling to find electoral votes wherever he can while trying to hold on to states that should have been put away long ago. This is the sort of imbalance we would expect to find in advance of a wave election, where national conditions drive a lopsided rebuke to the party in power. And it is not the only clue about what could be coming. In recent weeks we’ve seen several Senate races come into play in unlikely places like Kansas and Alaska. We’ve seen Biden solidify his position in the Sun Belt and the Rust Belt. The Trump campaign lags well behind the Biden effort in fundraising and cash on hand. Trump continues to struggle to find a coherent reason for voters to re-elect him while Biden’s message of compassion, competence and coming together resonates with the moment. Daily stories about spiraling Covid cases emphasize the issue Trump wants to avoid and Biden wants to highlight. The imbalances between the two campaigns are pronounced.

Then there is voter enthusiasm. As of this writing an astounding 90 million people have already voted, approaching two-thirds of the total 2016 turnout. Among them are a large percentage of new or infrequent voters, young voters, and voters of color. Take Florida, a perennial toss-up state where polling shows the race within the margin of error. An analysis of the first 7.4 million early votes cast there shows that fully one-quarter come from new voters, and models suggest they favor Biden substantially. This does not tell us anything about whether Biden will win Florida, which is always decided by tiny margins. But it does suggest that high turnout is materializing among Democratic constituencies, which is a necessary precondition to a wave election.

So far, we are seeing a turnout pattern like the one we saw two years ago when a Democratic wave crashed through Republican gerrymanders and handed the party control of the House. Both sides were energized and both sides mobilized but Democrats — with a huge assist from independent voters — overwhelmed Republicans in suburban districts across the country.

If Biden can reassemble the Obama coalition of young, multicultural and female voters, he stands to add seniors, white suburbanites and a healthy share of independents to his column. This would be a powerful coalition spanning age, racial and geographic categories with the potential to wash Republicans out of power up and down the ballot. Suburbanites are poised to be an especially important and ironic part of the story of this election. Suburban voters have been the bastion of conservative Republicanism for decades, but they have taken a hard turn against the Trumpification of the party. With college educated women leading the way, the suburbs are poised to pulverize Republicans and bury their ability to compete in national elections. 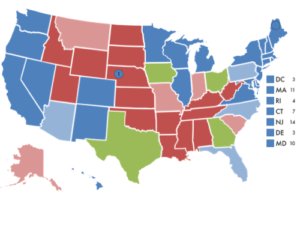 Biden’s political strength is reflected in the election’s geography. If you look at where the race is being contested it looks exactly like the map of the second of three scenarios I wrote about earlier in the month. This is the scenario that results in anything from a decisive Biden victory of 335 electoral votes to a landslide of 413. It is the map you get if polling has been largely accurate. The ten states in play are the Rust Belt five (Pennsylvania, Michigan, Wisconsin, Ohio and Iowa) and the Sun Belt five (North Carolina, Georgia, Florida, Arizona and Texas). Considering these are the states where the campaigns are targeting their spending and where the candidates are spending most of their time, it’s fairly clear that public polling is in line with what the campaigns are seeing, and the election will almost certainly be won in these battlegrounds.

In the final days of the campaign, polling shows these states to be aligned exactly as we expected several weeks ago. Biden maintains a substantial lead outside the margin of error in polling averages of Michigan and Wisconsin, and he is ahead by a smaller but steady margin in Pennsylvania. He leads narrowly in Arizona and is ahead within the margin of error in North Carolina and Florida. Georgia is a coin flip. Biden is competitive in Iowa and appears to be slightly behind in Ohio but a big enough wave could move all the Rust Belt states in the same direction. These tossup states will be determined by the composition of the electorate.

Then there’s Texas, a historically low turnout state where so far almost ten million people have voted early — a figure greater than the entire statewide turnout in 2016. Something is definitely happening in Texas, and while Democrats winning the state still seems fanciful it is the kind of surprising outcome a wave can produce and not out of the question if the emerging Democratic electorate is large enough to overtake the state’s historically red lean. Even if Biden does not win Texas, surge turnout puts Democrats in position to win a majority in the state legislature, pick up multiple House seats, and even make a long shot run at John Cornyn’s Senate seat. If Biden actually won Texas it would drive a stake through the heart of the Republican Party and signal a clear sea change in American politics.

Texas only happens with a wave so big that Biden has already won most if not all of the other states in play. But the fact that we are talking about Texas at this late date is perhaps the clearest sign of what is transpiring as voters silently register a collective judgment on the Trump years. Lost in all the attention paid to the close Sun Belt contests is how Biden stands on the threshold of the presidency by virtue of his competitive position in the upper Midwest. If the wave fizzles, he is still the favorite to win next Tuesday. If it develops it will be the first wave election in a presidential year since 1980, producing the kind of lopsided result we saw when Ronald Reagan ousted Jimmy Carter and with similar longterm implications for our politics.

In his ongoing attempt to delegitimize the process, Donald Trump is demanding that we know the outcome of the election on Tuesday night, before many of the early votes are counted. If the signs we’re seeing of a wave election materialize, he may just get his wish.