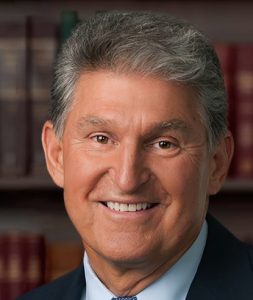 Stop me if you’ve heard this one. Democrats propose legislation that Republicans dislike, in this case the formation of a commission to investigate the insurrection of January 6 modeled after a congressional committee where Democrats would be in the majority, set the agenda, and have subpoena power. Republicans object and Democrats negotiate, giving in to every Republican procedural demand. The result is a bipartisan commission with an equal number of Democrats and Republicans, shared subpoena power, and a mandate to complete their work this year. The Republican-driven compromise is approved in the House with most Republicans voting against it, then runs into trouble in the Senate when Mitch McConnell expresses reservations, then objections, then opposition, then asks his caucus to filibuster it. Susan Collins of Maine valiantly engages in a doomed attempt to find ten senators who will buck their leadership. Joe Manchin (the guy in the picture) pleads for bipartisanship with Republican colleagues who have no incentive to listen. The bill wins majority support but falls short of the supermajority requirement. It’s done. We all move on, awaiting the next issue (infrastructure policy) where this cycle can repeat itself.

Anyone who’s been watching the Senate in our age of hyper-partisanship could have predicted this outcome during the negotiation stage. Republicans do not want to investigate the events of January 6. It is bad for them politically and will raise unpleasant questions about the actions of some of their members and the former president who still leads them. However, this version of the filibuster set piece is far more volatile than usual and might lead to unintended consequences. I know suggesting this seems tinged with a hint of insanity, because the movie has always ended the same way. But the insurrection is sufficiently different to make opposing an investigation a risky move.

There are three reasons why voting to shut down a bipartisan commission could carry consequences for Republicans: