With Democrats inching closer to an inevitable faceoff with the filibuster as they attempt to move the For the People Act through the Senate, I thought this would be a good time to look at just how lopsided the Senate has become as population shifts have created outsized imbalances between the states while Senate rules compound the power of the minority. As you might expect, the answer is it’s really lopsided, with highly populous mega-states severely disadvantaged by having the same two votes as every other state. But even with the imbalances created by constitutional design it’s easy to see how control of the Senate would be within reach of both parties. It’s not until you overlay a sixty-vote threshold on the structural inequities that you reach the ridiculous point where a tiny fraction of the country has the power to dictate policy to the overwhelming majority.

Please read on if you’re interested in looking at the numbers. Otherwise, feel free to scroll down to the last paragraph for a pithy conclusion.

We all know that the Senate was not designed to be equitable in the way we normally think of representation. That would require a rough approximation between population size and voting power. Instead, the Senate represents states, not people. It’s a holdover from the Articles of Confederation, where each state was equally represented in the legislature, and part of the compromise that got small states on board with the Constitution. There’s supposed to be an imbalance between small and large states. It’s the whole point of the institution.

Back in 1790, the largest state – Virginia – had 11.7 times the population of the smallest state – Delaware – putting Delaware’s 59,000 residents on an equal legislative footing with Virginia’s 692,000. That was enough to get Delaware on board with an arrangement that compensated them for having only one lonely member in the House of Representatives. But the concept of one state, two votes didn’t account for the kind of population movement we’ve witnessed since the last decades of the 20th century. Today’s largest state – California – holds 39,538,000 people. The smallest – Wyoming – has only 577,000. This gives Wyoming about 68.5 times the voting power of California. It’s hard to believe modern-day California would have agreed to an arrangement like this if they had a seat at the table during the Constitutional Convention.

The population disparity becomes especially stark when you start to look at how it translates into Senate votes. Article I, Section 3 gives every senator one vote as a way to maintain equal representation of the states. As an exercise, let’s relax that requirement and reassign voting power so that it’s proportional to state population figures, giving senators the ability to cast an unequal number of votes in accordance with the population of their states. For instance, Michigan has about three percent of the population, so the two Michigan senators would divide three votes between them (one-and-a-half votes each). Alaska has about two-tenths of one percent of the national population, so each Alaska senator would be entitled to cast one-tenth of a vote. Applying this blatantly unconstitutional rules change would create an upper chamber that looked something like this: 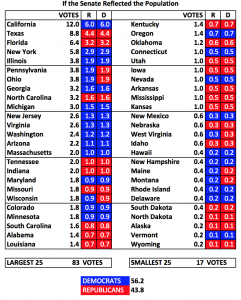 In our redesigned Senate, California’s two senators would cast six votes apiece, because California would be awarded 12 votes in accordance with its share of the national population. In turn, the fifty senators from the twenty-five smallest states would cast a combined 17 votes. Think about that for a second. So many Americans live in California that a population-based Senate would give them only five fewer votes than the least densely populated half of the states. In fact, the distribution of population by state has become so imbalanced that the eight senators from the four most populous states – California, Texas, Florida and New York – would control one-third of the votes in the Senate. Meanwhile, Joe Manchin of West Virginia would get three-tenths of a vote. Bernie Sanders would get one-tenth.

What does this mean for partisanship? A population-based Senate would give Democrats a firmer majority than they have now. The fifty Democrats would cast 56.2 votes and the fifty Republicans would cast 43.8. But this difference is not as great as it first appears. Had Democrats not been able to narrowly flip the two Georgia seats last January and win statewide for the first time in decades, their advantage would shrink to 53-47. And had they not been able to narrowly win two seats in Arizona – which had been a Republican state forever – it would deflate to 50.8-49.2, or fairly close to where it is today.

Or look at the four largest states with their combined 33 votes. Right now, they are evenly divided between the parties – four seats each – with a slight advantage to Democrats by virtue of their dominance in California. But that advantage isn’t overwhelming. In our revised Senate, Democrats Dianne Feinstein, Alex Padilla, Chuck Schumer and Kirsten Gillibrand would hold a combined 17.8 votes, while Republicans John Cornyn, Ted Cruz, Marco Rubio and Rick Scott would cast a combined 15.2 votes.

Likewise, the Republican advantage in sparsely populated states isn’t as great as you might think. Republicans do hold a majority of seats in the 25 least populous states, but this only translates to a four-vote advantage in a Senate weighted by population. We may have one more Dakota than we need but when you add Rhode Island and New Mexico to the mix things start to even out.

Where these inequities make a huge difference is when they are compounded by Senate procedures like unanimous consent and of course the filibuster, rules designed to protect minority rights in a legislature where the minority already enjoys a huge baked-in advantage. But even this could be managed and the Senate could still function if both parties were invested in governing. However, at a moment like ours when the political fortunes of one party turn on their ability to derail popular legislation, procedures intended to protect minority rights become tools of destruction for majority rule.

Check out what it takes to reach the 41 votes needed to sustain a filibuster. Start with the two Republican senators from Wyoming in the bottom right-hand columns of the table and count upwards until you get to 41 senators (one of the two Republicans from Tennessee). You will have accounted for senators elected by roughly one-fifth of the population. In a legislature increasingly operating along strict party lines where one party is invested in preventing the other from acting, it takes only a tiny handful of voters from states with small populations to send enough senators to Washington to prevent the rest of the country from having effective representation.

As long as forty-one senators can prevent a measure from coming to a vote, Republicans can block legislation with senators who would only have 20.6 votes in a chamber that equitably reflected the population. When senators elected by one-fifth of the country can dictate to the other four-fifths, minority rights become minority rule. Democrats who contend that preserving the filibuster somehow promotes compromise would do well to keep this in mind.