USE DISCOUNT CODE NGN16 WHEN ORDERING FROM ROUTLEDGE

Next Generation Netroots: Realignment and the Rise of the Internet Left by Matthew R. Kerbel and Christopher J. Bowers (Routledge, 2016) 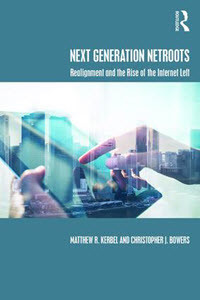 Matthew R. Kerbel is Professor and Chair of the Political Science Department at Villanova University and the voice behind Wolves and Sheep

Christopher J. Bowers is Senior Campaign Director for Daily Kos and an experienced consultant for a wide range of campaigns and organizations

In Next Generation Netroots, Chris Bowers and I examine how grassroots activists, driven by social media and a nexus of online media and activist organizations, are attempting to forge a new political order during a period of political and economic instability. Our frame of reference – which provides the analytical framework for Wolves and Sheep – starts with the assumption that the Reagan coalition has run its course and we are in a period of transition to a new political alignment. But what happens next remains unclear, with progressives and conservatives each wielding potent political tools as they battle each other for dominance in the coming political order.

The left is fueled by a maturing movement politics born and raised online, which has emerged from an amateur and sporadically effectual affiliation of bloggers to become an integrated nexus of professional organizations in the age of social media. In their growth curve, we see striking parallels to the rise of movement conservatism half a century ago, and in their skillful use of the Internet we see echoes of previous realigning moments when new media of communication – television, radio, the telegraph – played a role in shaping a new political regime. But the right is not without powerful resources, notably a virtually endless supply of money and institutional advantages derived from four decades in power.

As progressives and conservatives struggle to define the next political era, we see ample evidence that a resolution of the pitched battles of the Obama years is likely. This moment shares with other realigning periods the sense that political parties are failing to address the public interest. Democrats and Republicans as currently constituted have been unable to address extreme income inequality, rapidly changing demography, and the collapse of the political center owing to the radicalization of a portion of the Republican base during the Obama years. Realigning periods are dislocating and can be tumultuous, but they do resolve. Next Generation Netroots offers a roadmap for how we might transcend today’s acrimonious politics, and why it is likely to happen.

Purchase Next Generation Netroots and remember to use the code NGN16 to get 33% off the list price.